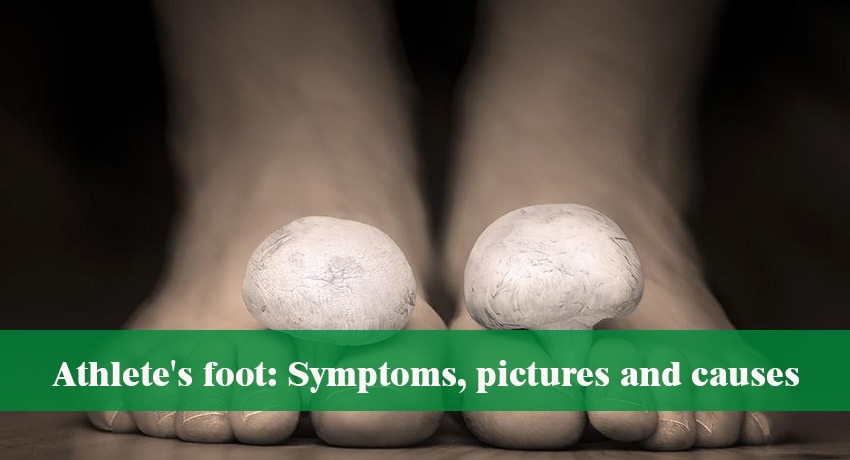 On this page, I would like to show you how to recognize an athlete’s foot. First, the causes, risk factors, and pathogens of athlete’s foot are described.

What are the typical symptoms?

The following pictures will show you!

The athlete’s foot (med.: tinea pedis) is a contagious fungal disease of the skin, which in most cases is triggered by filamentous fungi (so-called dermatophytes).

In America, approximately 100 million people suffer from athlete’s foot.1 Many of those affected find the topic unpleasant, as it is often associated with a lack of personal hygiene.

The infection with the skin fungus usually settles in the spaces between the toes or on the soles of the feet and can become very unpleasant, often characterized by itching.

If you are unsure, you should consult a doctor. On this page, you will learn how the disease develops and how you can identify athlete’s foot.

What does athlete’s foot look like? Pictures and symptoms

The symptoms of athlete’s foot vary. A first sign is often an itchy rash in the spaces between the toes or on the sole.

However, the infection can also spread to the toes as well as the back of the foot. In the beginning, the fungal infection is usually not noticed, but then the more profound the fungus penetrates the skin, the more severe the symptoms become.

The skin weeps, cracks and peels. Athlete’s foot blisters may appear on the skin. The areas affected by the pathogen are reddened, and if the skin comes into contact with soap, there may be a burning sensation.

Over time, more extensive and more significant areas of skin peel off.

Often, an unpleasant odor can also develop due to the fungi on foot.

Those who have dehydrated skin, which may also show cracks, can have it examined by a doctor. The medical professional can make an accurate diagnosis through a special examination.

Caution. However, it is often not easy to distinguish the signs of a fungal infection from dry skin on the feet.

You can see the athlete’s foot between the toes on the left of the first picture, the so-called interdigital expression. This type can be easily recognized in the early stages by itching or burning the feet.

In addition, the spaces between the toes are reddened, the skin is often swollen and sometimes already torn.

The middle picture shows the squamous-hyperkeratotic form of the fungal infection. Symptomatic is dry and scaly skin in the sole, often on the heel. In addition, the edge of the feet and the tips of the toes may be affected.

In this type of disease, it is usually difficult to interpret the symptoms correctly. Dry skin on the feet is often ignored.

The dyshidrotic form of the athlete’s foot is visible in the picture on the right. Typical for this type are small itchy blisters, which are perceived as red spots. These often occur in the arch or the outside of the foot.

Under no circumstances should you prick the blisters on your feet, as this creates a gateway for further germs such as bacteria or viruses! Either the small blisters open by themselves or dry up.

The treatment of the pathogens of the athlete’s foot usually takes between 4 and 6 weeks. In addition to sprays, creams, and powders, there is also a solution for the application, which promises a one-time treatment of the fungi.

What happens if you do not treat the athlete’s foot?

A fungus causes an infection of the athlete’s foot. This can also cause a condition of the nails.

The fungus travels along the foot to the toes, and over time it can infect the toenails, and nail fungus develops. Treatment of the nails is long and tedious.

In the case of nail fungus, the nails discolor white to yellow and brownish at the beginning. In the further course, the nail plate thickens and deforms.

A diagnosed athlete’s foot can be treated by several means.

A foot fungus treatment usually lasts only a few weeks; in the case of nail fungus, the symptoms can persist for up to 12 months.

Infected skin flakes can spread over the body. In this way, the fungus can also settle in other places.

This self-infection or spread of the pathogen is medically also called autoinoculation. In addition, one spreads the infection by walking barefoot on floors or objects.

When should a doctor be consulted?

Anyone who is not sure whether they are infected with athlete’s foot should contact a doctor.

The dermatologist (dermatologist) usually takes a skin sample and examines it. In this way, an accurate diagnosis can be made, and other infections can be ruled out.

If the condition is advanced, the doctor may prescribe prescription medications to treat it.

In addition, consultation with a medical professional is advisable if the healing process is unusually protracted.

How does an athlete’s foot develop? Causes and risk factors

Athlete’s foot is usually caused by filamentous fungi (dermatophytes) of the species Trichophyton rubrum. However, pathogens that occur far less frequently can also be molds or yeasts.

Fungi and pathogens feel most comfortable in moist and warm conditions. This is why feet are so susceptible to infection. Usually, the skin’s acid mantle can fight off the fungus well, and no disease develops.

However, when minor injuries occur, such as cracks in the skin of the feet or blisters on foot caused by pressure, the pathogen can easily penetrate the upper layer of the skin.

An athlete’s foot often develops between the toes, as this is where skin lies on the skin and can thus form and hold moisture particularly easily.

The moist environment on the feet and toes causes a slight swelling or softening of the skin, and this provides the ideal growth conditions for the skin fungus.

The fungi can easily penetrate the softened skin and slowly spread.

Certain factors favor the development of an athlete’s foot. In general, it can be said that people with poor circulation and people who sweat a lot on their feet are more at risk.
The risk groups include especially smokers, diabetes, people with circulatory disorders, and lack of exercise.

Weakened health and poor circulation in the feet promote the development of the athlete’s foot.

But athletes are also often affected by an infestation of the fungus due to the tight sports shoes in which a lot of sweating occurs.

The same applies to people who have to wear air-impermeable shoes for professional reasons (for example, boots or safety shoes).

Foot deformities such as flat feet, splay feet, hammertoes, or a genetic predisposition also play into the hands of an athlete’s foot.

Men are more often affected than women, and infections occur more quickly in older people than younger ones.

Athlete’s foot is contagious. As with many other infections (e.g., nail fungus), the fungi are spread through contact infection through infected skin flakes or direct physical contact with an infected person.

People who have athletes’ feet spread the pathogen unintentionally through their skin scales.

Since the fungus can survive well for a long time without its host, the risk of infection lurks significantly often in public places where people walk barefoot.

Examples of places with an increased risk of infection are swimming pools, hotel rooms, or changing rooms.

Here, prevention of infection is essential. Instead of walking barefoot, bathing slippers or socks should be worn for prevention.

Furthermore, the infection can also happen through direct skin contact with the feet.

If a family member has a fungal infection, they can easily pass it on to someone in the family in bed or on the couch. Sharing towels also poses a risk.