What are the symptoms of nail fungus?

Is it normal for the nail to become a little discolored?

Can it even be due to a severe illness?

The cause is a fungal infection of the nails, which can be infected with other people or contaminated surfaces. In about 80 percent of the cases, the nails of the feet are affected, and in 20 percent, the nails of the hands.

Most of the symptoms of nail mycosis are not painful, but they are cosmetic. However, if the treatment waits too long, it can lead to severe pain and even peeling nails.

For this reason, it is essential to recognize nail mycosis in good time and to start therapy for the disease quickly.

Most of the time, the affected nail loses its natural shine and turns either yellow or brown. The toenail thickens and can crumble in advanced stages. With fingernail fungus, the symptoms are very similar.

The nail fungus often develops at the end of the nail and spreads over the entire nail over time.

Check out these pictures to see what nail fungus looks like: 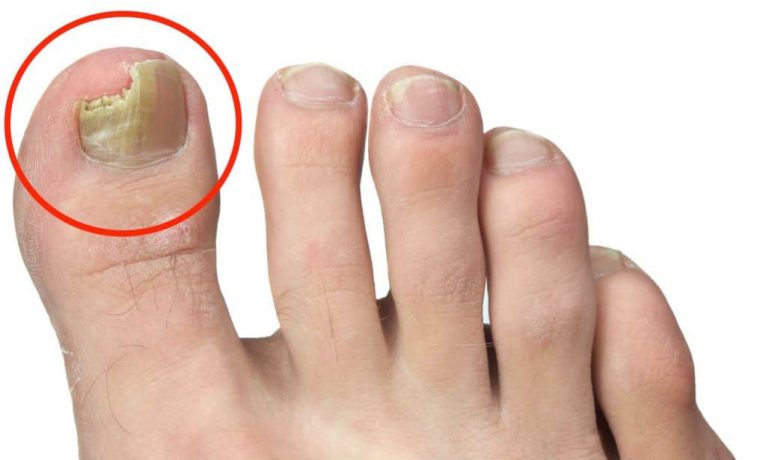 Toenail fungus on the big toe in the terminal stages. 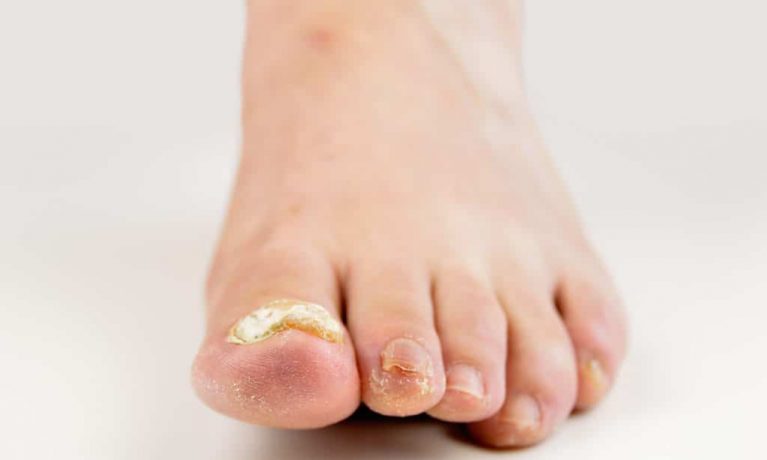 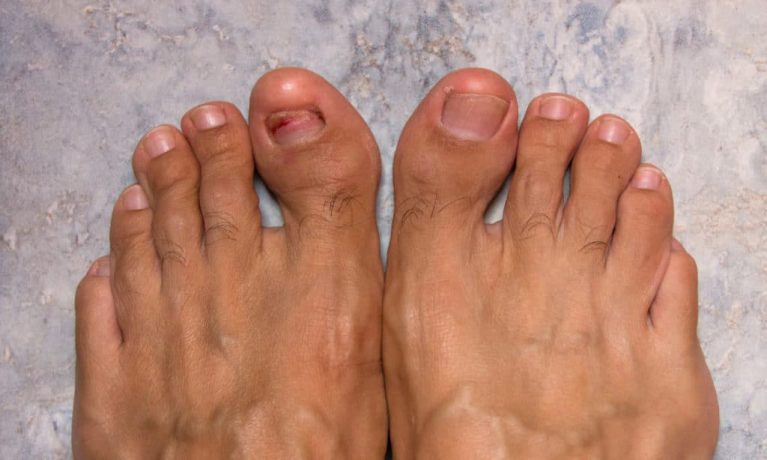 Detached nail on the big toe due to nail fungus. 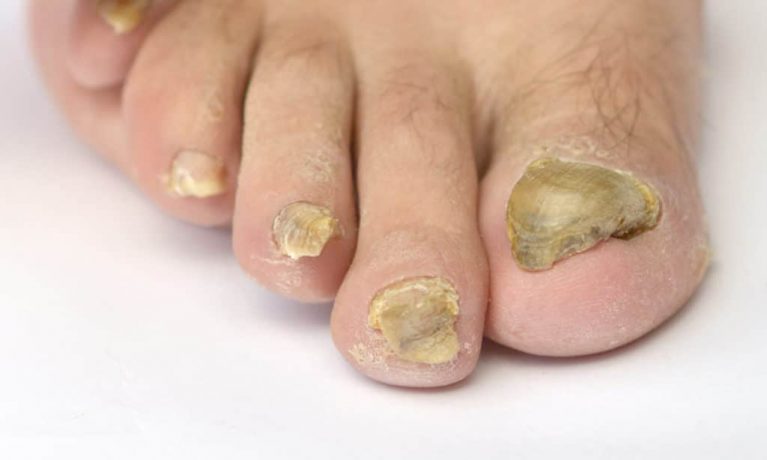 The nail fungus is present on all five toes. It is already very pronounced and shows a strong curvature and cornification. 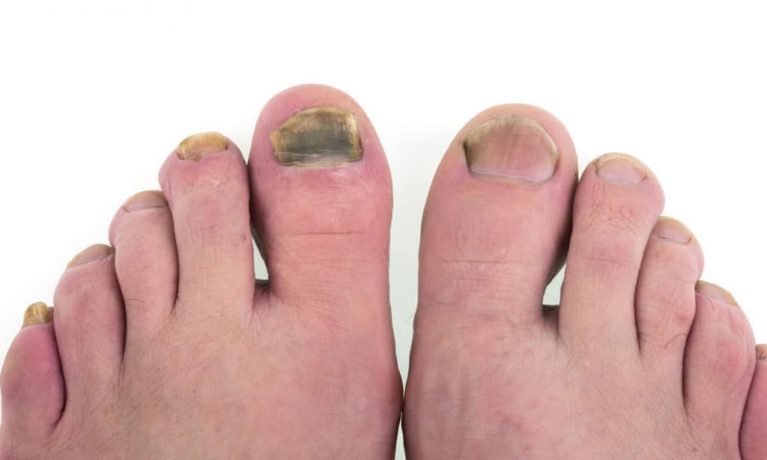 Black nail fungus on the left big toe caused by a mold. The nail fungus spread to the right foot. 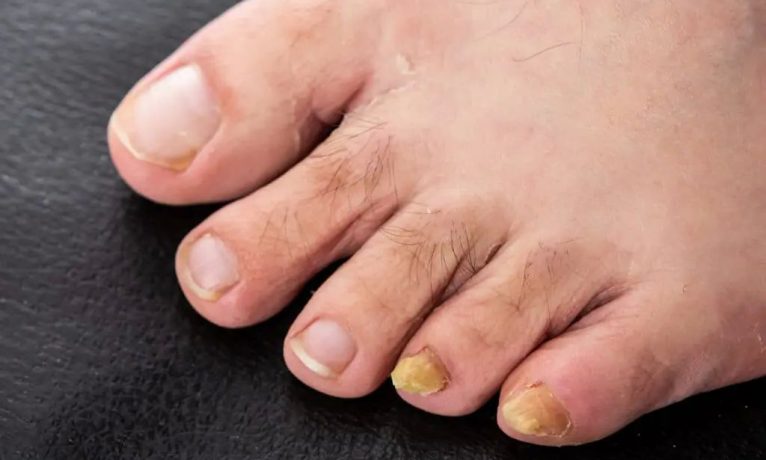 The nail fungus can be recognized by the yellow discoloration of the nail.

When your nails look something like the pictures, it’s high time to act! At the beginning of the infection, over-the-counter medications can produce perfect results.

I have tested the various drugs and explain the advantages and disadvantages of the individual remedies against mycosis on the nail fungus treatment page.

How do you recognize nail fungus?

Nail fungus can be recognized that the brand loses its luster, is thickened and discolored.

The color of the nail changes to white or a yellowish-brown tone in the initial stages of nail mycosis.

In addition, the shape of the toenail or the nail on the hand can change due to the fungi.

Another symptom that can be used to recognize nail fungus is that the affected nail becomes brittle and parts of the nail split off.

Different areas of the nails (nail matrix, nail bed, or the nail itself) can be affected.

In the beginning, the fungus usually penetrates the underside of the nail plate at the end of the nail and only then spreads towards the nail root. Most often, the toe nails are affected, especially the big toe nail.

Mycosis on the nails should be treated as it cannot heal on its own. If the nail fungus is ignored, the infection can spread to other nails.

In addition, the nail bed can become inflamed, and this can lead to severe pain.

An infection should be treated early as soon as the first symptoms of nail fungus can be recognized.

A healthy fingernail or toenail is light pink and shiny, the nail’s surface is smooth, and the shape is even.

The nail fungus attacks the nail and feeds on the keratin of the nail. For this reason, one of the first signs is a slight change in the color of the nail (yellow spots or white streaks).

Most of the time, the person concerned hardly perceives any symptoms or pain.

The nail often loses its typical shine at the beginning of the infection and becomes dull.

The picture above shows the typical course of onychomycosis very well.

In the initial stage, the fungal nail infection often begins on the front or side of the nail and spreads from there towards the middle towards the nail root.

In addition, the structure of the nail changes. After the fungus destroys the keratin, the nail loses its stability.

This causes the nail plate to crumble on the front and side edges of the nail.

In the advanced stage, the nail plate becomes thicker and more deformed. In addition, in this phase of the disease, it can often happen that the nail begins to separate from the nail bed. 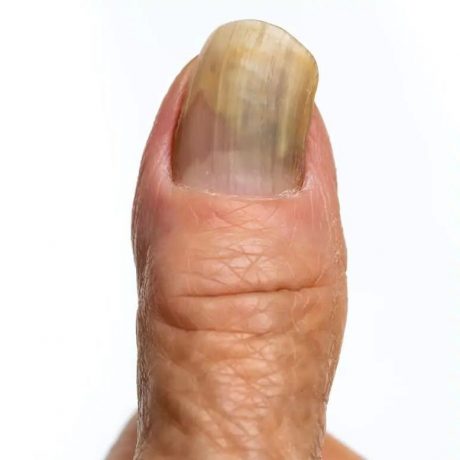 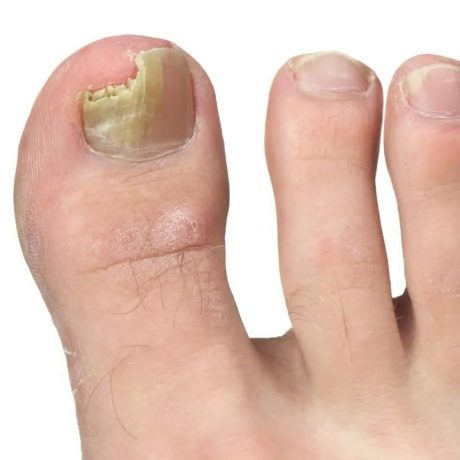 End-stage onychomycosis on the big toe.

At this stage, the nail is severely curved and deformed. In this final stage, the fungus has severely damaged the nail that it loses its shape and separates from the nail bed. The toenail dissolves completely off at worst.

This allows more bacteria to enter and those affected also suffer from inflammation in the nails area.

In the final stage of the fungal infection, severe pain and restrictions in everyday life can occur.

In addition, the nail fungus can develop an unpleasant odor.

The following is a paragraph about the athlete’s foot and to what extent this promotes nail fungus. Then, each type of onychomycosis is explained in detail.

Be careful if you have an athlete’s foot.

In many cases, toenail fungus is a secondary disease of an athlete’s foot (tinea pedis). Therefore, it is crucial to quickly identify an infection in the feet and treat the athlete’s foot.

According to current estimates, one in three adults is affected by athlete’s foot.

Most of the time, the athlete’s foot shows up in the spaces between the toes. However, the sole, the sides of the foot, or the back of the foot can also be affected.

If itchiness is felt on foot, this is an indicator of the disease. The skin is often reddened or discolored whitish, and small blisters can also appear on foot.

These changes usually lead to a burning sensation and pain. If these symptoms occur, the athlete’s foot must be treated before it develops into toenail fungus.

There are several types of nail mycosis. These differ in their frequency and the associated symptoms.

The pathogen penetrates the underside of the nail plate on the front part of the nail. From there, it spreads in the direction of the nail matrix (nail root). Then there is severe cornification below the nail.

This will lift the nail plate and turn it yellow. If left untreated, the last step is a complete loss of the nail. The nail fungus runs “outside-in.”

This form of nail mycosis is usually caused by dermatophytes (thread fungi) and is the most common.

Here the fungus spreads from the cuticle of the nail wall (= where the nail grows out). Then it reaches over to the cuticle. This is how it begins to spread towards the nail plate.

This means that the infection runs “inside out.” The nail’s root is affected first, and the disease slowly progresses to the tip of the nail.

This phenomenon is also triggered by dermatophytes but is much less common.

The cause of this appearance is a superficial infection of the nail plate. Characteristic are white, patch-like changes in the surface, which primarily affect the toenails.

This form is based on an infestation with Candida fungi (= yeast fungi). A contributing factor is the chronic inflammation of the nail wall. The nail turns yellow-brown.

This infection of the deeper nail plate leads to a yellowish discoloration or dark pigmentation.

This appearance shows the end of a long-standing infection. That means the destruction of the nail.

Conclusion on the symptoms of nail fungus

These symptoms are typical of the onset of a fungal nail infection. As soon as you notice this, the fungus should be treated.